Having options is usually a good thing. For most of my games recently, I have bought them for my PC due both hardware-superiority and for easier access to games. However, I love my consoles and always felt they had something more personal to them. One good example, are the Nintendo consoles which have personal mascots and exclusive titles, and even at times special hardware capabilities such as unique controllers. When I was searching for upcoming games, I noticed Nihilumbra, a mobile game that was gonna be ported to the Wii-U. It looked interesting and hearing the best version of it was for this console through an interview, I decided to give it a shot.

“It’s an inhospitable world. You are not part of it”

You start of  B/born in “the void”, an emptiness without any sense of purpose. Feeling the unsettling nature of this world, you escape it and try to find a place you can call home. This is really all there is to the plot, but it focuses much more on the journey itself. By having a narrator asking questions about your worth and the world itself, it takes a different approach. You see: Nihilumbra is a take on nihilism, and while the game is focusing on the concept of it, it also takes the opportunity to ask a lot of questions about this and other elements that are tied to nihilism, such as the void, the destruction of the world and more, making it more about asking the right questions than really finding a right answer. It is also not pretentious, which is hard to be in a philosophical game. It knows what to ask, yet also showcases that it doesn’t necessarily have the right answers or always a clear perspective, making me ponder on these questions when the game was turned off. 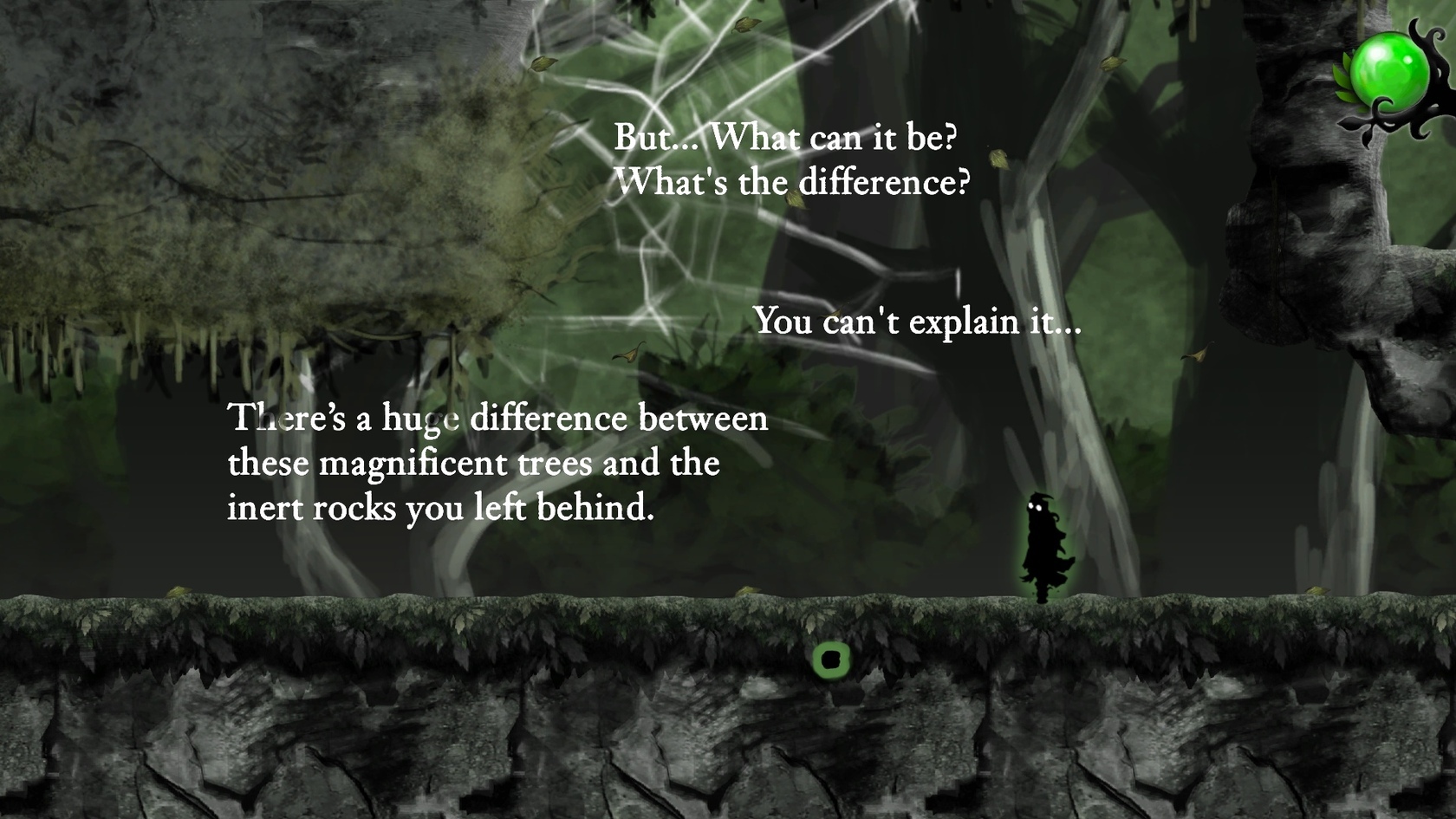 The atmosphere is incredibly well done, with the voice of our narrator being well put and his motives uncertain. It is unclear if he wants to help, damage you or simply be realistic, which is actually well paced. It was odd how both intimidated, yet also comfortable his approach was, without it being a mess. I was actually surprised that a bigger plot was not needed, and how well it focused on your journey through the world and you becoming stronger. Asking the right questions, has rarely been this intriguing in a game. I only wish the ending was not so abrupt.

Paint with colors of the world

Nihilumbra is a linear puzzle-platformer with color magic as a focus. Besides walking left and right, and jumping, you will find one flower in each world you visit, representing a color and the theme of the world you are in. There are 5 flowers in total: blue, green, brown, red and yellow, each with an interesting magic that can be applied to surfaces. Blue will create ice, green will make areas bouncy, brown will make them sticky, red represents hot as fire and yellow can lead electricity. You also have a purple-color which you start off with, representing the void and is only used to remove color-magic. To use them, you touch the screen on the gamepad and apply them to a surfaces. There is a limit to how much you can use a color, but it was never a hindrance to me, and I even forgot throughout the game that I even had limitations.

The puzzles themselves are really creative and fun to tackle, each making you either see more uses the colors can have, such as ice-magic can slide enemies off cliffs, and making a surface sticky can make you wall-jump, or use multiple colors for puzzles. The enemies in the world must also be tackled throughout the game by being creative, similar to the puzzles. While the red-magic will easily kill an enemy when you acquire it late in the game, there are luckily some you can’t simply use fire on, making it still challenge you through well-made puzzles. All puzzles are a joy to tackle, but more often than not, they can be easy to figure out. This does make the game flow better, but some puzzles could have had more challenge to them. There are also some auto-scrolling segments, highlighting that you will enter a new world. These start off slow and uninteresting, but as you get more colors to use, they become much more intense and enjoyable thanks to multitasking both your character and the plenty of colors.

While everything is well made and they keep up the use of both old and new color magic, I just wish for more. The game ends after a bit over 2 hours, which is a shame, due to how much more it could have offered. However, while it lasted, I always enjoyed every puzzle I was met with despite how easy some where. And the co-op is a nice exclusive extra for this console.

Beautiful, yet at times unmoving

The artstyle to the world is done with painting and the backgrounds are quite the eye candy. With detailed visuals, they represent each area well. However, the animations in these places are limited. There are some nice weather-effects with snow, rain and similar, but the backgrounds are not affected by it, making it all feel a bit stiff. Everything related to the void, especially the character models, are much better. The enemies have a really disturbing and creepy design to them, and our main-character has a unique, solace design to him, with nice idle animations at times that represents the area you are in.  For example, he will sneeze in cold environments or sweat in hotter areas, which is definitely a nice touch. However, the oddest part is the still-images between chapters. They are always in 4:3, which is bizarre when the rest of the game is in full widescreen.

The soundtrack is fantastic, with a good selection ranging from calm to unsettling, all with orchestra and heavy use of piano, violin and contrabass. It is impressive just how grand the tunes are and I hope the composer will never stop with his work. With only one voice actor, it is phenomenal how much of an impact he has, making the journey more intimidating and yet: intriguing.

“I guess you are smart enough”

After beating the game, you unlock the art-gallery as well as void mode. Void mode gives you more dangerous and harder puzzles to take on, that will certainly test your skills and add more hours to your playtime, which fixes my issues with the main campaign. Beating it 100% will also reward you with a silly extra that is worth it, especially since the puzzles themselves are so well made. There are also a couple of secrets that are fun to search out for and require creative thinking. While the achievements are only a minor extra, some are creative and can put a smile on your face.

I love it when games make me ponder either through gameplay or through its narration, and Nihilumbra does both. While the main campaign could have used more content, luckily the extras have you covered if you wish for more of a challenge, and the philosophical journey was definitely a fantastic one. The ride was short, but worth my time and comes recommended for anyone who wishes for a good brainteaser in more aspects than just its puzzles.

A guy who likes to talk about video games and loves tabletop gaming. Writer for corruptsavefile.com, you can always follow me on twitter @GSlionr if you ever want the latest article from me :) View more posts

One thought on “Nihilumbra”